Dealing with open source software, I regularly encounter many kinds of licenses — MIT, Apache, BSD, GPL being the most prominent — and I’ve taken time out to read them. Of the many, the GNU General Public License (GPL) stands out the most. It reads like a letter to the reader rather than legalese, and feels quite in tune with the spirit of open source and software freedom.

Although GPLv3 is the most current version, I commonly encounter software that makes use of GPLv2. I got curious about the last line in its license notice:

Why does this license notice have a physical address, and not a URL? After all, even though the full license doesn’t often get included with software, it’s a simple matter to do a search and find the text of the GPLv2. Do people write to this address, and what happens if you do?

Asking the question on Stack Exchange

I turned to the Open Source Stack Exchange and got a very helpful answer. It’s because the GPLv2 was published in 1991, and most people were not online. Most people would have acquired software through physical media (such as tape or floppies) rather than a download.

Considering the storage constraints back then, it wouldn’t be surprising if developers only included the license notice, and not the entire license. It makes sense that the most common form of communication would have been through post.

The GPLv3, published in 2007, does contain a URL in the license notice since Internet usage was more widespread at the time.

I decided to write to the address to see what would happen. To do that, I would need some stamps and envelopes (I found one at my workplace) to send the request, and a self addressed enveloped with an international reply coupon to cover the cost of the reply.

I was disappointed to find out that the UK’s Royal Mail discontinued international reply coupons in 2011. The only alternative that I could think of was to buy some US stamps.

I got some stamps

The easiest place to look for US stamps was on Ebay. I didn’t realize that I was stepping briefly into the world of philately; most stamp listings on Ebay were covered in phrases and terminology such as very fine grade, MNH (Mint Never Hinged), FDC (First Day Cover), NDC (No Die Cut), NDN (Nondenominated), and so on. It’s pretty easy to glean that these are properties that collectors would be looking for.

I ordered what seemed to be a ‘global’ stamp, for the smallest but safest amount that I could (about £3.86). The listing mentioned that it was ‘uncertified’ which was mildly unnerving, did that mean it was an invalid stamp? I decided to chance it, and quickly exited that world.

After a few weeks of waiting, I eventually received the ‘African Daisy global forever vert pair’ stamp which was round! I should have noticed that the seller sent me the item using stamps at a much lower denomination that those I had ordered. Oh well.

I prepared the request

With the self addressed envelope ready, I wrote the request and addressed it to the GPLv2 address. Luckily I did have some UK stamps available to send the letter with. 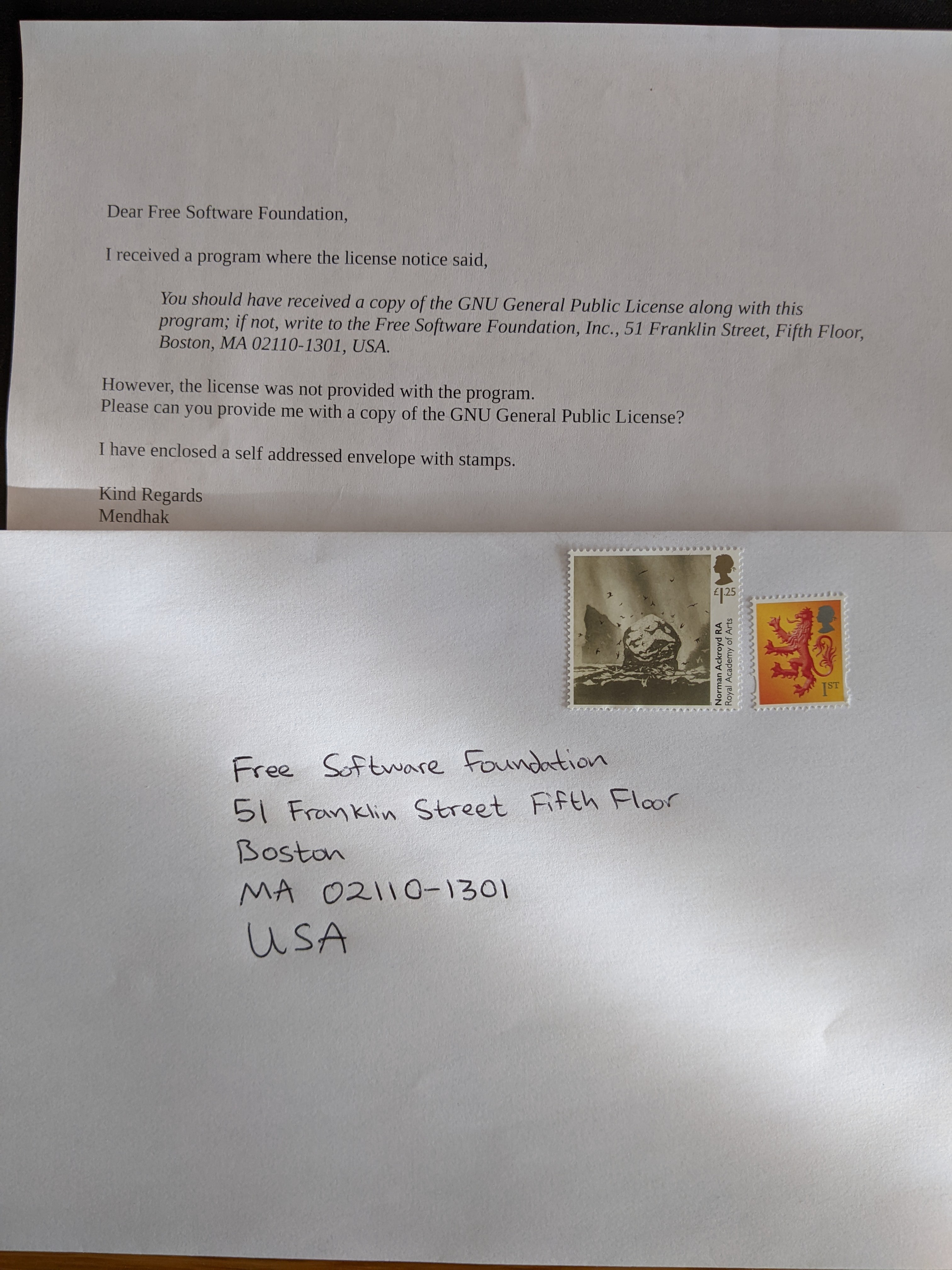 Writing the address on the envelope was awkward, as I haven’t used a pen in several years; it took a few attempts and some wasted envelopes, printing the address would have taken less time. But it was ready so I posted it in my nearest Royal Mail box.

I had posted the letter in June 2022 and about five later weeks later, I received a reply. The round stamps looked sufficiently stamped upon with wavy lines, known as cancellation marks, which are yet another thing that philatelists like to collect!

Anyway the letter inside contained the full license text on 5 sheets of double-sided paper.

The paper was a weird size

The first thing that came to attention, the paper that the text was printed on wasn’t an A4, it was smaller and not a size I was familiar with. I measured it and found that it’s a US letter size paper at about 21.5cm x 27.9cm. I completely forgot that the US, Canada, and a few other countries don’t follow the standard international paper sizes, even though I had written about it earlier.

I received the GPL v3

There was a problem that I noticed right away, though: this text was from the GPL v3, not the GPL v2. In my original request I had never mentioned the GPL version I was asking about.

I could choose to pursue by writing again and requesting the right thing, but it would take too much effort to follow up on, and I’m overall satisfied with what I received. As a postal introvert, I will now need a long period of rest to recoup.