Stable Diffusion is a machine learning model that can generate images from natural language descriptions. Because it’s open source, it’s also easy to run it locally, which makes it very convenient to experiment with in your own time. The simplest and best way of running Stable Diffusion is through the Dream Script Stable Diffusion fork, which comes with some convenience functions.

Once installation is finished, initialise conda, but tell it not to activate each time the shell starts.

Get the model file

The model file needed by Stable Diffusion is hosted on Hugging Face. You will need to register with any email address. Once registered, head to the latest model repository, which at the time of writing is stable-diffusion-v-1-4-original. Under the ‘files and versions’ tab, download the checkpoint file, sd-v1-4.ckpt.

Next, move the model file downloaded previously, into this repo, renaming it to model.ckpt

While still in the Stable Diffusion repo, create the conda environment in which the scripts will run.

The first time this step runs, it will take a long time, due to the numerous dependencies involved.

Once the setup is done, these are the steps to run Stable Diffusion. Activate the conda environment, preload models, and run the dream script.

A prompt will appear where you can enter some natural language text.

As an example, try

Wait a few seconds, and an image gets generated in the outputs/img-sample folder. 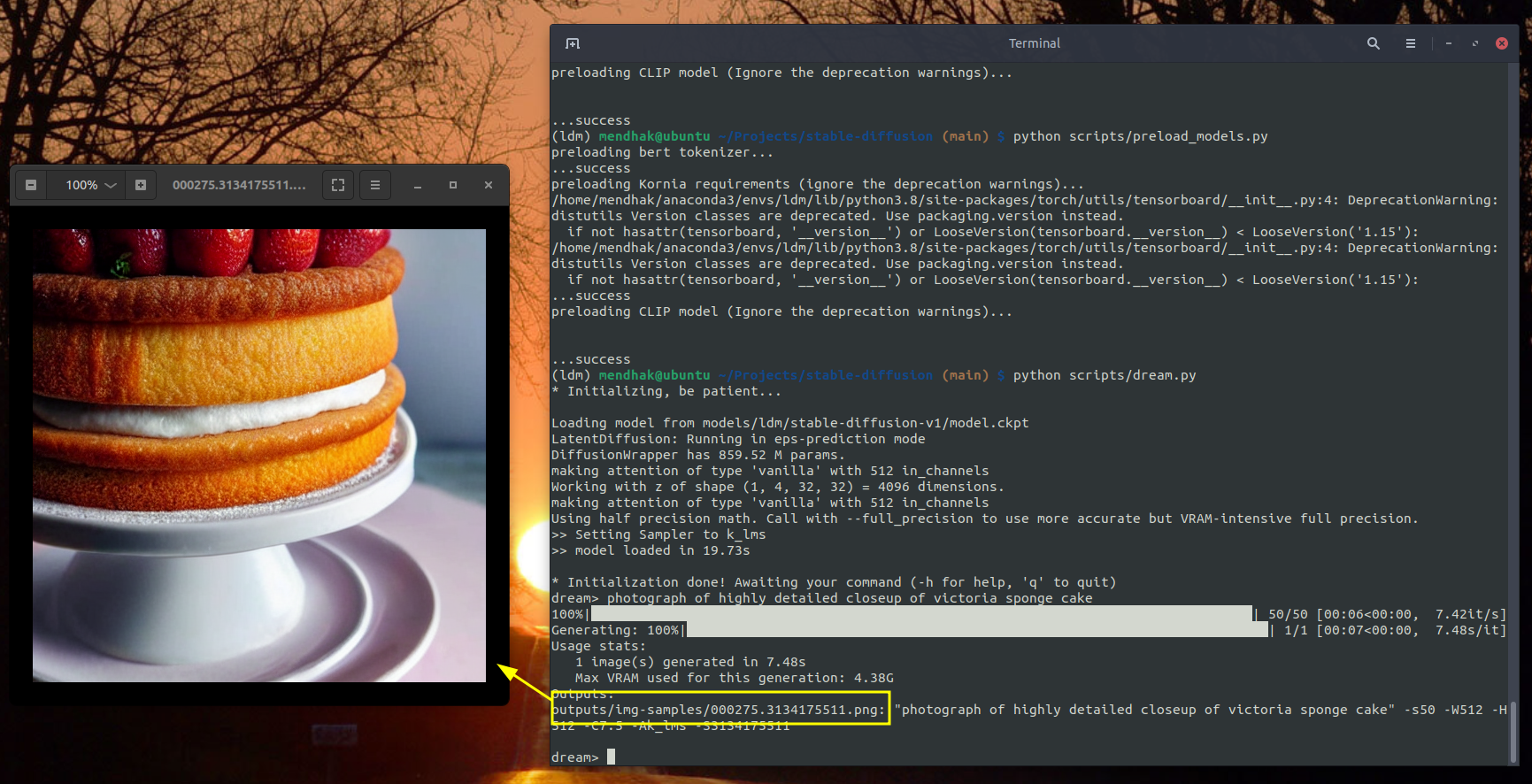 Conveniently, a dream_log.txt file shows you all the prompts you’ve run in case you want to refer back to something. Against each line, you will also see a seed number that looks something like this: -S2420237860. This allows you to regenerate the exact same image by specifying the seed with your text prompt.

Using an image as a source

You can also use a crude image as a source for the prompt with the --init_img flag.

You can take the output from one step and re-feed it as the input again, and come up with some interesting results.

By default the output is 512x512 pixels. There is a separate module you can use to upscale the output, called Real-ESRGAN.
It’s really simple to install, while in the conda ldm environment, run:

After it’s installed, go back into the dream script, generate an image, and this time add the -U flag at the end of the prompt (either 2 or 4)

The module for face restoration is called GFPGAN. Follow its installation instructions here, clone the GFPGAN directory alongside the stable-diffusion directory. And be sure to download the pre-trained model as shown. You can then use the -G flag as shown in the Dream Script Stable Diffusion repo.

Type --help at the dream> prompt to see a list of options. You can use flags like -n5 to generate multiple images, -s for number of steps, and -g to generate a grid.

More details, including how to use an image as a starting prompt, can be found in the README.

If you’re like me, you will need ideas for prompts. The best place to start, I’ve found, the Lexica.art site. Find something interesting, and copy the prompt used, then try modifying it.