I have written a script that will attempt to update your Github user profile status with the game currently being played on Steam. I haven’t been using the Github Profile Status feature for any purpose, so might as well use it for something interesting to me. 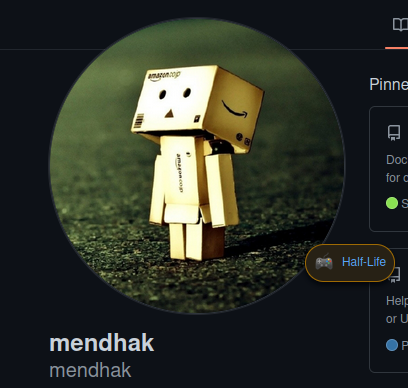 The script can mark the status as ‘busy’, and also expires the status after a certain number of hours.

The script is available as a Github Action, a Docker image, and a standalone script. That should provide enough flexibility to run it as part of Github CI, or a Raspberry Pi, or something else.

Regardless of how you run it, there is a little setup required first.

Your Steam Profile will need to be set to public, since the library used simply scrapes the Steam profile page. You’ll also need to know what your Steam ID is, which you can get from SteamID.io.

On Github, you will need to generate a Github Access Token, with the user scope.

Run it as a Github Action

You can consider running it on a Github Action schedule.

Where MY_GITHUB_ACCESS_TOKEN is an Actions Secret in your repository, and it contains the Github Access Token value generated earlier.

Run it in a Docker container

To run it in a Docker container:

To run it as a standalone NodeJS script:

You can choose whether you are shown as busy or not by passing a GITHUB_STATUS_SHOW_BUSY=True environment variable.

You can set the status expiry time in hours by passing a GITHUB_STATUS_EXPIRES_AFTER=3 environment variable.

So far I haven’t found a way to get this to work with non-Steam games. The library I’m using doesn’t expose this information and I’ve raised an issue on their Github repo